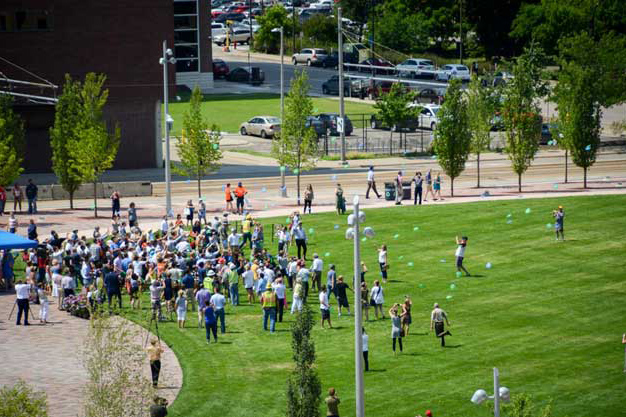 A sweltering celebration featuring a ceremonial Frisbee toss, dancing and enthusiastic remarks from community leaders praising new green space for the city signaled the grand opening of The Commons park on Thursday.

The Common’s eastern block is now open to the public in time for the grand opening festivities of U.S. Bank Stadium this weekend. The western block bordered by the new Edition apartments remains under construction and will open later in August.

“This is a transformative public place for downtown Minneapolis and for the east side of downtown,” said Mayor Betsy Hodges at the grand opening celebration. “Ten years ago, or even five years ago, I don’t think anybody would have thought it would have looked like this around here — and here we are. This is remarkable.”

The 4.2-acre block is surrounded by the new Wells Fargo Towers, the stadium, new housing and the Armory.

“This is a park for everybody,” Hodges said, adding the park has helped the city land the Super Bowl in 2018, the NCAA Final Four in 2019 and most recently, the X Games.

The mayor thanked the business community, including Ryan Companies, the City Council and former Mayor R.T. Rybak for his “vision” for the park.

Pat Ryan, CEO of Ryan Companies, which developed the Wells Fargo towers and new housing next to the Commons, outlined high expectations for the park, hoping it becomes one of the “most memorable in the country.”

He credited the Vikings with sparking renewed interest in the area by choosing to build the new stadium downtown.

“The economic development initiative that was put into place to attract the Vikings stadium continues to generate economic opportunities far beyond this six-block area,” he said.

“We hope families, young people, old people, all walks of life come here to enjoy this park for generations to come,” he said.

“This is just the beginning because in just a few weeks the other block will open as well and you’ll be able to experience the amazing difference between the two halves of the park. This open space for play and then in the other block a more intimate system of valleys and hills and trees and shade,” she said.

Other amenities, including bathrooms and another shade structure, are planned for the future.

City Council Member Jacob Frey (Ward 3) said he’s had a phenomenal few weeks, noting he’s gotten married, had a honeymoon, the city secured the X Games, the Wells Fargo complex opened and now the community gets to celebrate the Commons.

To date, Green Minneapolis, a nonprofit public-private conservancy, has raised more than $14 million for the park toward its goal of $22 million. The Park Board technically owns the park and the city leases it.

The city issued $18.8 million in bonds for the Commons. Ryan Companies will pay off debt service on the bonds for the first 10 years and then parking revenue from nearby ramps will cover the remainder of payments.

The Minneapolis Downtown Improvement District will oversee park operations through the end of 2016 until a longer-term agreement is finalized with Green Minneapolis.