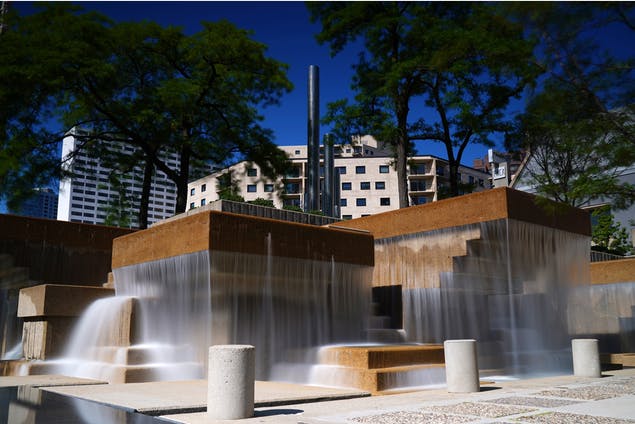 After working with three mayors over a decade to revitalize Peavey Plaza, Minneapolis City Council Member Lisa Goodman finally got to splash across the central basin of the downtown gathering space on Thursday.

“The vision for the project was making this water feature accessible for everyone,” Goodman said after crossing the basin. “I had to walk across the water, mainly because I didn’t believe it myself.”

The $10?million renovation gave a much-needed makeover to the below-ground plaza, which was built in 1975 next to Orchestra Hall. It had no wheelchair ramps, and its water features were more often dry than wet in the last decade. The city came close to demolishing the plaza in order to start anew, despite the objections of preservationists.

In the end, the city decided to fix what was already there and gathered enough money — including a $2?million state grant and $4?million raised by the Minneapolis Downtown Council and nonprofit Green Minneapolis — to pay for the renovation.

On Thursday, water flowed from cylindrical fountains and cascaded over ledges. Instead of a pond, there is a raised basin, where people can walk or roll across a thin sheet of water.

A ramp off Nicollet Mall allows those with wheelchairs or strollers to access all levels of the plaza.

There are new trees, lighting and, on the southern edge, gender-neutral public bathrooms, which Goodman called her “big dream” for the space.

In front of a crowd gathered by the basin, Mayor Jacob Frey thanked the donors who funded the renovation, calling Thursday “a really proud day for this city.”

“Downtowns are about having fun, losing yourself and wandering home a little bit later than you otherwise would,” he said. “That’s what ultimately Peavey Plaza helps us to do.”

He also praised Goodman, who he said “has been working on this project for longer than I have lived in the city of Minneapolis.”

Goodman, who had lived in the Loring Park neighborhood for more than 20 years, told the crowd that Peavey Plaza is the backyard of the neighborhood.

“Very rarely am I at a loss for words,” she said before thanking the residents of her ward. “I think with this one, we hit a home run.”

Later, Frey, Goodman and others rolled up their pant legs, stood in the water and cut the ceremonial blue ribbon.

Among the first to cross the basin Thursday was Brenda Try, who is in town from Michigan for a ballroom dancing convention. Try pushed a stroller carrying her granddaughter down the new ramps to the plaza.

“This is very relaxing,” she said. “What a great place to convene with your friends and family.”

Justin and Renee Pitman, who live in Loring Park, were on their way to buy groceries at Target when they passed by the celebration. One of the first times they were together was at the plaza 20 years ago.

Renee Pitman said she liked the “communal” vibe of people having their feet out by the water. She hoped that all people would be able to use the space and that the homeless don’t get kicked out.

“You need to have a place where everybody can be, where everyone is welcome,” she said. “I worry that when they make something really [nice] like this, that maybe they’re going to try to exclude people.”

The plaza is also designed to include an ice-skating rink during the winter, Frey said. For now, children splashed on the water to cool off from the summer heat.

“Look at that,” said Goodman, watching a young boy skip across the basin. “That’s the point.”