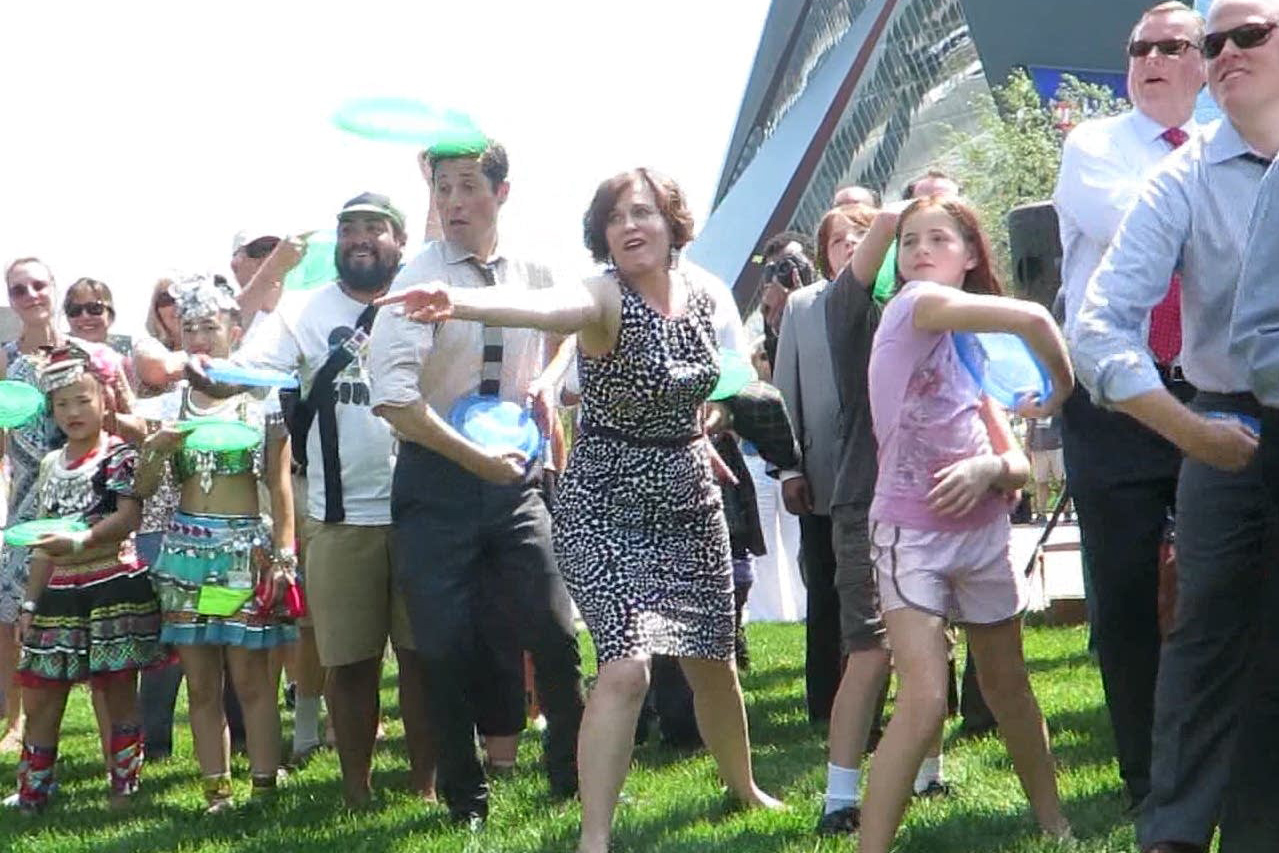 Football season has a kick off. Baseball games have a ceremonial a first pitch. But out on the new grassy turf bordering Portland Avenue in downtown Minneapolis today, Mayor Betsy Hodges tossed the official first Frisbee.

Hodges was joined by City Council members, business leaders, residents and hundreds of well-wishers to officially open the eastern half of the new Commons park, a space framed with trees and sidewalks, nestled between the new US Bank Stadium to the east and the downtown skyline to the west.

The 4.2-acre green space is one of the final pieces of a nearly $2 billion redevelopment project that has transformed the east side of downtown. Residents and city leaders say its what downtown Minneapolis has been missing.

“You’ve got the curved building, you’ve got the clock tower, you’ve got Wells Fargo, you’ve got US Bank Stadium,” said Bill Tucker who lives nearby. “It could not be better positioned in terms of beauty all around it to create this really spectacular starting point. I mean it’s gorgeous.”

Building the park, however, hasn’t been quite so appealing.

It started with a furious political battle over a $150 million city contribution to a new home for the Vikings and a parking ramp. Former Mayor R.T. Rybak parlayed that stadium deal into a new headquarters for Wells Fargo, with a key requirement: a two-block open space out the front door.

The planned $22 million park is funded in part by revenue from the parking ramp, but it also required private money from the developer as well as the Vikings and the stadium authority.

Literal turf battles followed over rights to use the park, who would own it and whether to eliminate a one-block stretch of Portland Avenue.

The battles have mostly been settled. Steve Cramer, head of the Downtown Council, says although the Vikings and the stadium authority do have unprecedented rights to a public space, there will be room for everyone.

Tom Fisher, dean of the college of design at the University of Minnesota, says it provides a public space that downtown residents and the central business district have never really had.

“I think it’s also kind of our front yard,” said Fisher, who helped plan the park, since the many people who travel downtown from the airport by light rail will be greeted by the park as they arrive.

There’s still some yard work to do. A fountain, a cafe and a park building, including restrooms, are still in the works. It will likely take another year of construction before all the details are finished.

The Downtown Council is running the space for now, but a non-profit conservancy, Green Minneapolis, will continue to raise money and operate the park — and possibly other spaces, like Peavey Plaza.