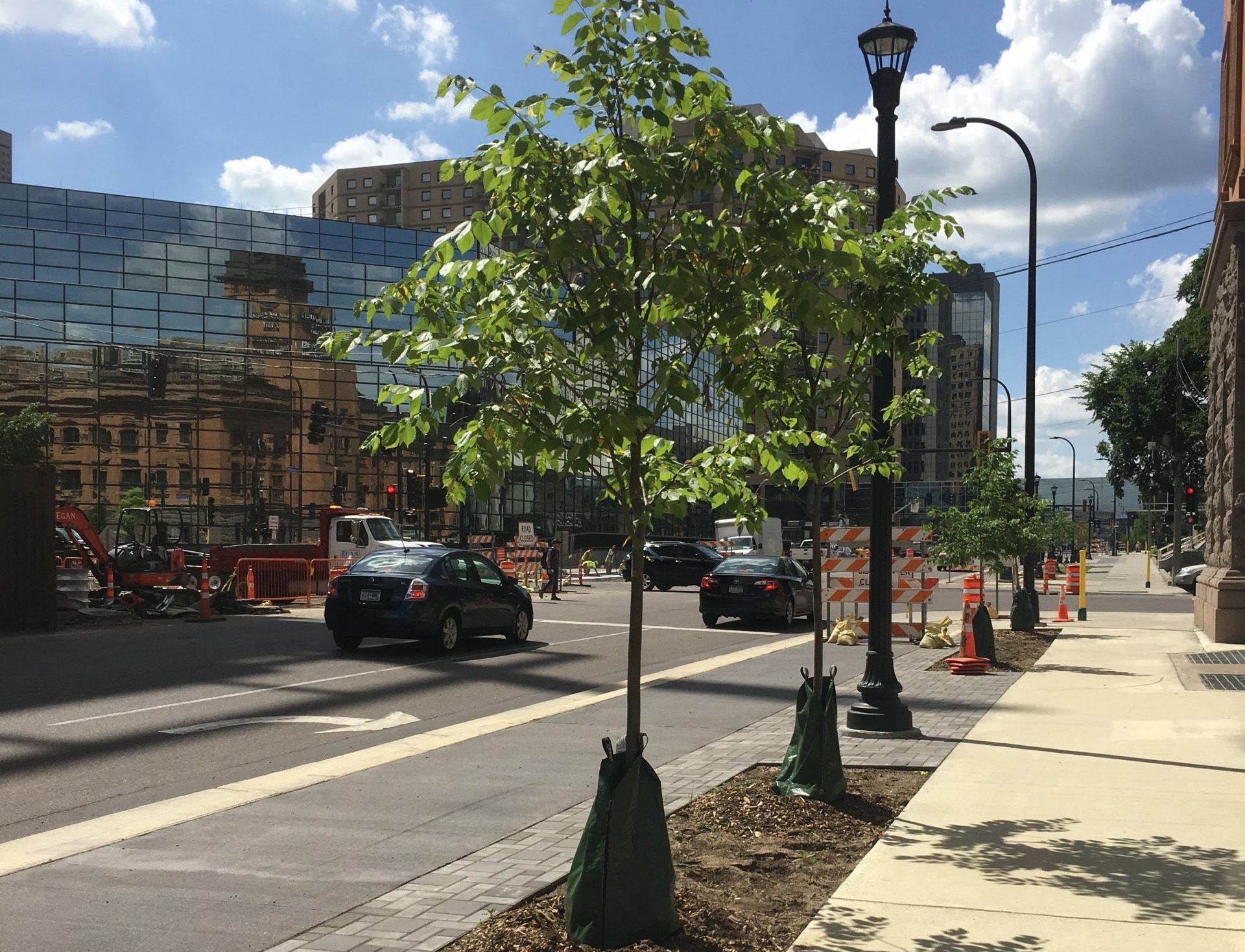 Minneapolis loses about 3,000 trees a year to increasingly destructive storms and invasive pests such as the emerald ash borer. At the same time, the city’s Tree Preservation and Restoration Levy, which raised $11.35 million from property taxes over the past eight years to replace some 40,000 trees, is due to expire at the end of this year.

Green Minneapolis, a nonprofit that advocates for expanding green spaces in downtown Minneapolis, proposed a program to sustain the planting of new trees across the city by selling carbon offset credits to companies that have publicly vowed to cut their emissions, and then using the money to plant trees.

“[The levy] is not only for emerald ash borer, but it also is for the tornado that went through north Minneapolis, and so we’re trying to figure out a way to either replace the levy or do something broader along the lines of climate resiliency,” said Commissioner Meg Forney in a recent interview. “The most obvious entity to deal with that is the park system. We deal with water quality, we deal with air quality, we deal with our stormwater, our trees. All those things are all wrapped up into us.”

Green Minneapolis Board Chair David Wilson has asked Minneapolis’ Sustainability Office for $2.25 million of federal COVID-19 relief funds to set up a one-year pilot. The Park Board will receive $2 million to hire a forestry crew to plant 7,000 trees in 2022, focusing on economically disadvantaged areas with less tree canopy than the rest of the city, such as northeast and north Minneapolis.

The remaining $250,000 would establish a process for monitoring the tree planting, certifying credits with the nonprofit carbon registry City Forest Credits, and developing a marketplace of Minnesota businesses to be credit buyers.

Commissioners Forney, Steffanie Musich, Chris Meyer, LaTrisha Vetaw and Jono Cowgill voted for the resolution. Commissioners Brad Bourn and Londel French voted against it, while Commissioners AK Hassan and Kale Severson were absent. There was no discussion before the vote during Wednesday’s full board meeting.

However, when the proposal came up in committee last month, Bourn advocated for extending the property tax levy instead of working with Green Minneapolis to acquire federal relief funds.

“You don’t have to look very far through [Form] 990s to look at Green Minneapolis, and the Downtown Improvement District are pretty much really big paychecks for Steve Cramer,” he said. “The answer is to advocate for 2.25 million dollars in the levy, and then possibly do a subcontract for services with Green Minneapolis where we can really … have some control over the outputs as opposed to using our political capital against ourselves.”

Cramer, a longtime downtown booster and CEO of the Downtown Council and Downtown Improvement District, is not compensated as a voluntary board member of Green Minneapolis. He declined to comment.

“Once we get to a certain level of years behind us, we’ll be able to fully fund the planting of additional trees in the city through the carbon offset credits program,” responded Musich during the committee. “I understand not all my colleagues are big fans of public-private partnerships, but we do need to try to find ways to reduce the burden on taxpayers while benefiting them in a positive way.”

The Park Board resolution calls for staff to develop a memorandum of understanding with Green Minneapolis to support its project and its request for funds from the city’s Sustainability Office without reducing the Park Board’s funding for other programs.

Minneapolis will get $281.5 million from the American Rescue Plan. The city anticipates receiving Treasury Department guidelines next week for how the dollars may be spent, at which point staff will begin planning for the funds, said city spokesman Casper Hill.

“More decisions will be made around the city’s internal process at that time. No plan is currently in place to collect external applications,” he said. “It’ll take a while before the city determines how these federal funds will be used.”

Minneapolis City Council Member Linea Palmisano, budget committee chair, said she would like to see the 2022 budget include creating jobs in urban reforestation “at a level that we haven’t yet seen.” In an e-mail to Budget Director Amelia Cruver, Palmisano listed the tree-planting pilot as one of her priorities for COVID-19 relief money.

“I think that this idea has a lot of potential growth for a local workforce, and leveraging some private money that could come into this with the beginning of a carbon offset program,” she said. “As we look for … relief money and growing our city a little differently and adapting, I think this is one of those things that can address resiliency and reduce issues of flooding.”

Susan Du covers the city of Minneapolis for the Star Tribune.