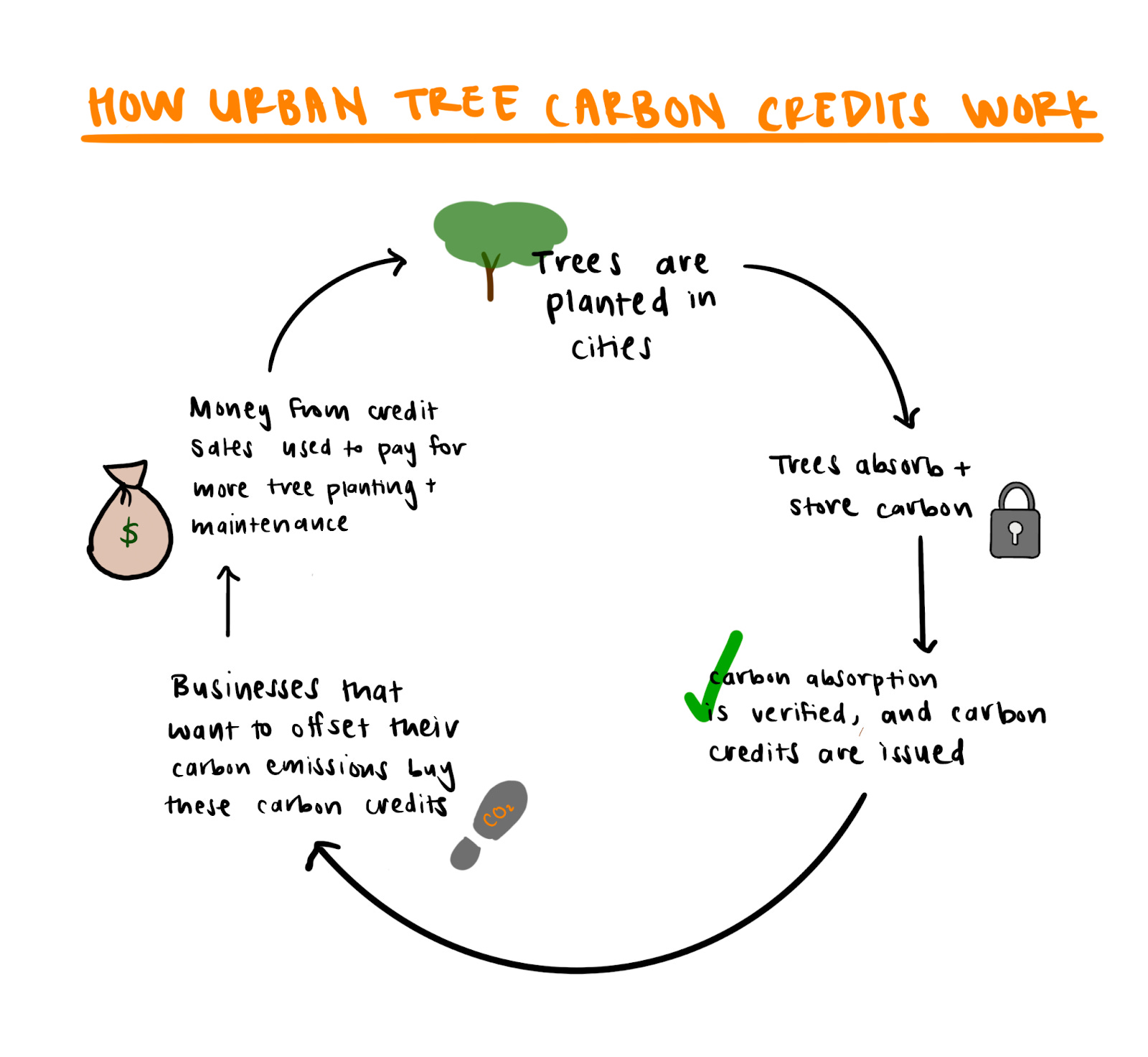 If The Giving Tree were a city girl from Minneapolis

A story of urban tree carbon credits in Minneapolis, Minnesota. (Not by Shel Silverstein.)

In late September, we found ourselves sitting at the edge of a giant water feature in Peavey Plaza in the heart of Minneapolis, Minnesota. We were there to interview David Wilson and Michaela Neu, the founder and staff lead (respectively) at Green Minneapolis.

Green Minneapolis’s team has (currently) only one full-time staff member + an 8-person board, but they had a lot of big wins to share. They had fundraised for a new park called The Commons, which opened in the summer of 2016, and operated and maintained the park through March 2020. They also led the fundraising campaign to renovate Peavey Plaza, where we were sitting. These projects were absolutely stunning, and we’ll cover them in a later piece. But what made this interview so special was the creativity and effectiveness of the Green Minneapolis team, and how they applied that ingenuity to a seemingly basic solution: tree planting.

If you’ve read some of our earlier work, you know that urban tree planting is a climate resilience ringer. But as a quick recap, here are the benefits of trees:

? They disrupt and reduce the urban heat island effect, which can help reduce the cost and energy requirements of air conditioning in the summer. This effect alone saves the US $7.8 billion every year!

? They absorb stormwater, reducing runoff and flooding risk. A single urban tree can absorb hundreds to thousands of gallons of stormwater annually.

? They absorb and store carbon, obviously. (About 48 pounds of carbon per year per tree, actually!)

The problem is that trees are often seen as a “nice to have” and not a “must have” in cities. That makes them hard to pay for, and often planting them at a large scale takes an appalling amount of time. But solutions don’t do us any good unless we actually put them to work.

Our goal with this piece is to share everything we learned from Green Minneapolis, so you all can set up similar structures in cities across the world.

So how does an urban tree carbon credit work?

In November, Green Minneapolis announced the state’s first urban tree carbon offset project in partnership with City Forest Credits (CFC) and the Minneapolis Park and Recreation Board (MPRB). Here’s how it works:

So in short, MPRB plants and maintains trees, which capture carbon. CFC then calculates how much carbon those trees will capture, assuming that they live for 25 years. They use those calculations to issue carbon credits to Green Minneapolis, who then sells those carbon credits to local businesses. Green Minneapolis then funnels that revenue back to MPRB to fund more tree planting and maintenance!

Now that we know how this model works, we can talk about its perks, and why it works. Let’s start with perks.

Carbon credits aren’t exactly breaking news. But most of the tree-planting and preservation projects that generate carbon credits are in remote, rural locations. From the Appalachians to the Amazon, these projects don’t touch the everyday lives of most people.

But with urban tree carbon credits, we don’t just see their impacts on our carbon balance sheets; they make our everyday lives better and our cities more beautiful. Urban trees provide other benefits that CFC quantifies in resource unit and dollar value, including rainfall interception, particulate air pollution capture, and heating and cooling energy use reduction.

The credits being sold through this project cost about twice as much as a typical carbon credit, which specifically reflects the calculated additional value of these co-benefits.

Here’s the kicker: the Green Minneapolis team told us that no one had shied away from purchasing the credits due to their price. This is likely due to the fact that the benefits are local. Green Minneapolis is marketing these carbon credits to local businesses, who in turn view these credits as more than a climate commitment. They see it as an investment in their local community. These trees reduce their offices’ energy costs, make their commute more pleasant, and beautify their employees’ neighborhoods. Local buyers are willing to pay for real, local benefits. For more on how these benefits were calculated, you can check out the City Forest Credits site!

It creates a virtuous cycle of urban tree planting.

A feature of the partnership between Green Minneapolis and the MPRB is that any revenue generated from carbon credit sales can only be used to finance more tree planting and maintenance by the MPRB. This not only supports the maintenance and protection of already planted trees, but also finances the planting of more trees, which produce more credits, which generate more funds, which can be used to plant and maintain more trees, and so on….

So, remember how we mentioned that the carbon credit calculation assumes the tree will live for 25 years? Well, it turns out that this has a huge perk: it protects the city’s trees.

Oftentimes, urban development, construction, street maintenance, and miscellaneous city operations can lead to urban trees being cut down. Because traditionally, we don’t calculate the financial loss that cutting down trees creates. However, thanks to these carbon credits, the MPRB is contractually obligated to protect the trees that are part of the program. This creates financial consequences to cutting down trees, which encourages planners and private developers to avoid tree removal whenever possible. If tree removal is ever absolutely necessary, it should then be followed by tree replacement. This may actually lead to more than one young new tree being planted, since older trees capture more carbon. (Because this program just got started, this is an anticipated effect. We still have to see how it plays out in the real world).

Ok, those are the perks. Now let’s move onto why this works.

City Forest Credits has 38 ongoing urban carbon credit projects, but this project is unique in its implementation and design.

You may have noticed above that Green Minneapolis doesn’t actually plant the trees themselves, even though they manage the carbon credits. This is a unique arrangement, and it looks like this:

This arrangement lets everybody do what they do best. The MPRB focuses on tree planting and maintenance. CFC calculates, verifies, and issues carbon credits. And Green Minneapolis takes care of the administration, marketing and sales of carbon credits, and coordinates sampling and third party verification. This means that they will monitor the trees every year, and do physical site visits to check on the trees’ health multiple times throughout the project duration.

Financially, this works out for everyone because the MPRB doesn’t take on the significant upfront costs of setting up the carbon credits program (Green Minneapolis did all that initial work). In exchange for their work, Green Minneapolis and City Forest Credits (both not-for-profit organizations) each take small administrative fees. The remaining ~80% of revenue goes to the MPRB to plant and maintain trees.

This arrangement also makes tree planting a politically light lift. When the MPRB first approached Green Minneapolis, they were looking to increase funding for tree planting and maintenance in the City without having to rely on increasing taxes on residents. Instead, this structure provides local companies the opportunity to invest private dollars in public tree planting, while getting credit for their contributions in the form of carbon credits. And by taking on the ownership of the carbon credits, and the responsibility and risk of selling those credits, Green Minneapolis was able to implement a carbon credit program in just a year. If the MPRB had done this on its own, they estimate it likely would’ve taken several years to implement.

There are, of course, challenges.

No solution (especially a nature-based one) is without its challenges. Here are some of the challenges Green Minneapolis faced, and how they responded:

? Challenge: Climate change is threatening the survival of native trees in the area. Issues ranging from the Emerald Ash Borer to changing rainfall patterns are already impacting tree health across the Minneapolis and Minnesota.

? Challenge: What if the trees die before the 25-year window is up?

? Solution: The contract has a built-in buffer for trees that die — it’s a pretty serious cushion, and assumes a mortality rate of 20% with an additional buffer pool of 5%. That’s significantly higher than the historical data on Minneapolis’s tree mortality, which tends to be around 10%.

? Challenge: What if all of the carbon credits don’t sell? Carbon markets have had a rocky roll-out, and there’s a lot of talk about low-quality carbon credits, after all.

? Solution: Trust and local relationships! Green Minneapolis has a strong track record of working with both the city government and local businesses, and has developed a sterling reputation. Their connections with the private sector have been instrumental to establishing trust in these new carbon credits. This has allowed Green Minneapolis to secure purchase agreements within the first month of launching.

Now go forth and conquer!

Our goal with this piece is to show you how urban carbon credits can — and already do — supplement the funding for large-scale urban tree planting projects. We’re hoping that you now put this information to work to set up similar arrangements in your own cities. As a first step, we recommend using itreetools.org to see the positive impacts trees already have in your neighborhood. Then, you can even use it to estimate the benefits that planting a new tree would have, or see which tree is best for you to plant! (Lyn spent a few late-night hours playing with these tools and is officially obsessed. This is her new favorite website.)

If there’s any lesson to take away from this, it’s that a small, dedicated team can make a HUGE difference in their city. Green Minneapolis’s dedication and creativity has helped establish Minnesota’s first urban tree carbon offset program. Now it’s your turn.

If you’d like to explore setting up a similar system in your city, reach out to us at hello@parachute.earth. We will get you connected with the right folks, and Green Minneapolis would love to support you in the process!