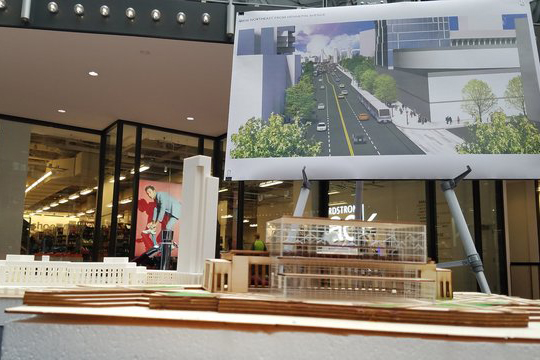 Minneapolis city leaders are re-imagining a new and improved downtown with waterfront access, a thought that even a few years ago might have seemed like a distant fantasy. The conversation is largely centered around the future of a massive post office

facility on S. 1st Street, which is currently blocking the Nicollet Mall business district from connecting directly to the Mississippi River.

It’s a vision Mayor Jacob Frey is hoping to achieve by getting his hands dirty–perhaps quite literally.

“What sets us apart in Minneapolis is this Mississippi River,” he said. “This should be the gateway not just to downtown Minneapolis, but to the entire western half of the country.”

Frey and other city leaders spoke Monday at the IDS Center, unveiling their plans to change the aging post office into a so-called “gateway park.” Complete with detailed models and plenty of blueprints and photos, they were hoping to convince the crowd gathered that the building has become more of a wall blocking the public’s view than a necessity the postal service needs to complete its sorting work in the digital age.

With modern mail service no longer requiring such a large building, the question now becomes what to do with a nearly-four-block behemoth–with ideas such as a market, a “city square,” and extended greenspace all in play. Monday’s discussion is the first step in what’s sure to be a yearslong process that has the potential to shape the city for generations to come.

“In reality, none of these in its exact form today will get implemented,” said Jenna Fletcher, who attended Monday’s meeting. “I think this is a launching point for further discussion.”