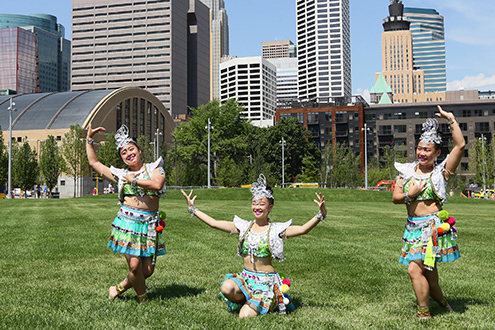 The Commons, a 4.2-acre public green space that even the Minnesota Vikings have called the “centerpiece” of Downtown East redevelopment, opened Thursday afternoon near U.S. Bank Stadium.

Ryan Cos. US Inc. and the city of Minneapolis partnered in development of the park, which has been in the works for more than three years.

Elected officials, project partners and dozens of community members gathered to mark the official opening of the park in a ceremony Thursday.

The park’s place as part of a revitalized Downtown East is a “model of public-private partnership the whole country can emulate,” Vikings President Mark Wilf said during the ceremony. “We want it to be a place where families can come to and … we are very proud to be a part of it. The Commons is a centerpiece of that.”

Wedged between the U.S. Bank Stadium to the east, the Ryan Cos.-built Wells Fargo Downtown East campus to the north and the Edition apartments (also developed by Ryan) to the west, the Commons features a programmable public space covering two blocks bounded by Park Avenue and Fourth and Fifth streets.

The earliest visions of a public space in Downtown East were unveiled in May 2013. In January 2015 the Minneapolis City Council selected San Francisco-based Hargreaves Associates for the design.

The east block of the park — now open to the public — offers an “awesome open space for play, and then in the [west] block there is a more intimate system of valleys and hills and trees and shade,” Jones said.

The west block of the park is expected to be completed and open to the public in August.

The $19.8 million project wouldn’t have been possible without the U.S. Bank Stadium to serve as the economic driver for a neighborhood that had missed out on redevelopment for so many years, said Pat Ryan, CEO of Ryan Cos.

Development of the stadium “created an opportunity for Wells Fargo to consider this for its home so long as there was an environment that was conducive to their location,” Ryan said. “Well, ladies and gentlemen, we have an environment that is beyond everybody’s expectations.”

The nonprofit conservancy organization Green Minneapolis, formed to advance greening the downtown area, is assisting in the fundraising campaign to cover the costs of the project. It has raised $14 million to date, according to the city of Minneapolis. A second phase of improvements to the park is planned, and its timeline will be dictated by fundraising results, project partners said Thursday.

Minneapolis Downtown Improvement District (DID) will operate the park through the end of 2016.

Earlier this year the City Council authorized staff to negotiate a long-term operations agreement with Green Minneapolis. Once those terms have been finalized, the contract will be brought for the City Council for authorization to hand operations of the park over to the organization beginning in 2017

The city has a memorandum of understanding with the Minneapolis Park and Recreation Board to transfer ownership of the property to the park board, then lease it back and be responsible for its operations.

“Ten years, ago even five years ago, I don’t think anybody would have thought that it would have looked like this around here,” said Mayor Betsy Hodges. “And here we are, right?”