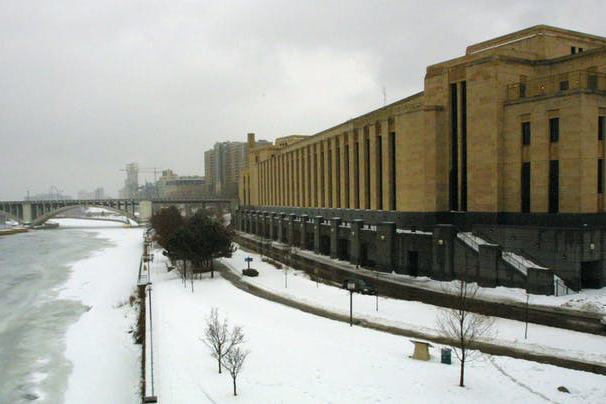 Postal Service has no plans to move out of landmark, but designs are drawn. Downtown leaders on Monday signaled their intent to re-imagine the site of the massive post office that looms over the Minneapolis waterfront.

“For four blocks we have buildings that are literally blocking the Mississippi River from the rest of our city in the form of the post office,” Mayor Jacob Frey said. The postal building has served a good purpose, Frey said, but it occupies “the most valuable real estate in our entire city, and we can do something spectacular with it.”

On Monday, Frey and other Minneapolis leaders unveiled drawings and models produced by students in the Minnesota Design Center at the University of Minnesota that would repurpose the historic art deco building, which was completed in 1933, and surrounding buildings that occupy seven acres.

File this one firmly in the category of long-term, however. No money has been set aside and no firm plans have been made. Kristy Anderson, a spokeswoman for the U.S. Postal Service, said the agency isn’t preparing to leave the building.

“There’s no plans as far as the Postal Service is concerned,” she said.

The building, at 100 S. 1st St., houses mail distribution for much of Minnesota and part of Wisconsin, she said. National priority mail also is handled there. In 2012, the Postal Service decided to shut down distribution centers in Duluth, Rochester, St. Cloud, Mankato and Bemidji and consolidate those functions in Minneapolis and Eagan.

A massive 1980s addition to the original building was meant to mimic the art deco architecture and faces the river, said David Wilson, a managing director at Accenture and chairman of Green Minneapolis, a downtown park booster group. He argued both buildings are now obsolete.

“The post office was built at a time when that was the center of the industrial district of Minneapolis,” he said. “And railways went through that building to distribute that mail across the country. Today the post office is almost an island surrounded by commercial and residential development. The railroads no longer go there and instead we have hundreds of trucks going in and out of that building every day.”

At a news conference at the IDS Center, Frey pulled small-scale replicas of the postal buildings from a model of the Minneapolis riverfront and set them on the floor, using a grout line between the tiles as Hennepin Avenue.

“Right now you have this massive monolithic parking ramp that blocks our Mississippi riverfront, and by the way this should be the gateway not just to western Minneapolis but the entire western half of our country,” Frey said.

He pulled the model buildings away one by one for the television cameras and a crowd of about 100 and said the space could be used for a market or riverwalk connected to Nicollet Mall.