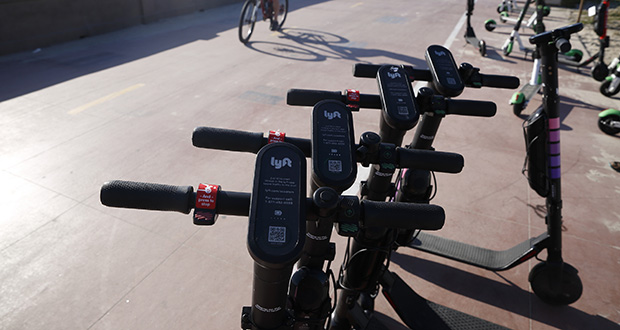 Cities where people bike and walk to their destinations don’t just happen. They must first be built, both in physical infrastructure and regulatory regimes.

That project was the topic Wednesday at a Chamber Town Talk event hosted by the Minneapolis Regional Chamber of Commerce. Panelists, including Miller Nuttle, Lyft senior manager for bike and pedestrian policy, said cities should be intentional about enabling “micro-mobility” solutions such as scooters and bicycles for all residents.

“Given that we’re an urbanizing country right now, what we do with these really dense urban spaces has an outsized influence on how we tackle things as big as climate change on a national scale,” Nutting said.

Lyft will be rolling out app-based scooter rentals this summer in Minneapolis, where it will join competitors Lime and Spin. Such services can be critical to “getting people the first mile or last mile,” Nuttle said. They also have a number of positive side effects, ranging from fewer cars and less pollution to more space for other public activities in the right of way, said Beth Shogren, executive director of Green Minneapolis.

“I think there’s a real opportunity to rethink our streets, and the real estate that is from property line to property line,” Shogren said. “If we are thinking less about cars, or we’re at least slowing down car traffic by reducing lanes, we have a micro-mobility lane, we have a car lane, that allows more sidewalk space. That allows space for trees and green.”

But if people are to take fewer solo car trips, alternative options need to be available, affordable, and perhaps most important, safe, said Ashwat Narayanan, executive director of Our Streets Minneapolis.

“I think there’s a perception that scooters, by themselves, are unsafe,” Narayanan said. “And the reality is that you are unsafe, on a scooter, because of the infrastructure.”

Micro-mobility infrastructure, ranging from painted bike lanes to entirely separate bike and scooter trail systems, are necessary to make such vehicles viable for most of the population, Nuttle said.

“If you look at countries like the Netherlands, or places that have really eliminated traffic fatalities, or gotten pretty close to it, they focus almost exclusively on changing the infrastructure of a street,” he said. “In America, I think we’re overly obsessed with education and enforcement as tools for making streets safer. I’m not anti-education. It’s very important. But they aren’t actually effective tools for changing behavior.”

A full build-out of micro-mobility lanes and other infrastructure might represent a daunting cost, Nuttle noted, especially for the many U.S. cities that have yet to even fully build out their sidewalk networks. But considering that cities are willing to spend hundreds of millions of dollars to rebuild a single highway interchange, the cost to redesign streets for safe scooter, bicycle and pedestrian use would be “a drop in the bucket,” he said.  And in Minneapolis, that transformation is already happening, said Shogren.

“The timeline for municipal planning and pedestrian right of way reconstruction, that’s a long horizon. But luckily, the city got it about five years ago,” she said. “And we will see the benefits in all of the projects that are coming down the pipe right now once we get through this insane construction season.”

Long-term operation for micro-mobility services such as rental bicycles and scooters will also require public investment, said Nuttle, who noted that the entire industry is currently supported by major investments of venture capital. He made the pitch to the Chamber members in attendance to support transforming these services into a sustainable model on safe and inviting streets for all users.

“The business community, I think, has the most to gain in a lot of ways for making street safer for walking,” he said. “It’s fundamentally good for your bottom line if the street is safer for pedestrians and bicyclists.”