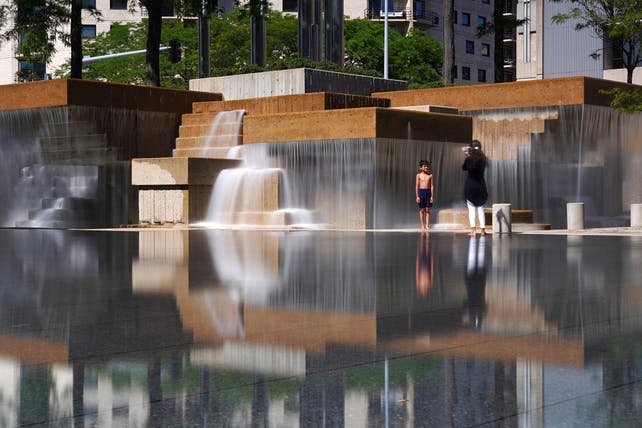 After nearly a decade of discussions and delays, lawsuits and settlements, the once forlorn Peavey Plaza is finally back in business, and it’s looking better than ever.

Orchestra Hall’s sunken front yard has retained its 1970s, concrete-lined charms. The cascading fountains, placid pool, leafy shade trees and terraced people-watching platforms are still there, spiffed up after years of neglect. Better yet, the plaza’s mobility-unfriendly design, which predated the Americans With Disabilities Act by 15 years, has been sensitively altered, vastly increasing access for all.

The project, both meticulous rejuvenation and quiet reinvention, was directed by Coen+Partners, the Minneapolis firm responsible for the engaging landscapes at several other prominent Nicollet Mall addresses, including the Minneapolis Central Library and Peavey’s across-the-street neighbor, Westminster Presbyterian Church.

The subtle — and effective — changes in the pool:

Kamin-Lyndgaard: The whole floor was raised. The water is now a quarter-inch deep, but it had been 10 inches deep. Even for an able-bodied person, it was a substantial step down. Now, there are no barriers.

Coen: And there are no signs that say “Keep Out.”

I love watching people show up and look at the water. They’re not quite sure if they’re going to go in, or not. A few minutes later, they take off their shoes, and they’re in. That’s my favorite part, watching the happiness come over people. Previously, no one walked in the water.

Also, [the floor] had been a brown tile. This is a local granite that we chose for slip-resistance, and for the color. One of the concerns from the very beginning was the idea of serenity. The deeper water brought a calmness that no one wanted to lose. We thought that if we went with a darker paver, we would capture the essence of the original pool and still have it be accessible. We looked at a lot of browns that were closer to the original tile, but the granite is closer to the water color.

K-L: The granite is incredibly dense. Compared with concrete, it has a much lower water absorption rate. The pool takes about an hour to drain, and about 15 minutes to fill. There were also a couple of improvements that we made to the fountains. The lowest catchment area was really deep, it was something like a 4-foot drop. We raised that floor. In several of the upper pools, the water depth was over 2 feet, and we raised them. Sustainability was another goal. We’re using a fraction of the water that the old plaza used.

Making the plaza accessible for all:

C: The goal of the entire project was to make it more accessible for all bodies, without losing the character-defining elements of Peavey Plaza. People were never invited down to all of the terraces, so we designed a series of accessible ramps.

The first time they saw the restored fountains in use:

C: I totally teared up. To see it actually working was a pretty magical moment.

In this urban space, the amount of water that falls creates a noise that takes you out of the city. The water also brings this sense of renewal — you have this feeling that you’ve found a sacred place. When people in our city have guests visiting, they take them to places like the Stone Arch Bridge. This is going to be another one of those civic destinations. I think that there are going to be a lot of proposals and weddings down here.

C: They’re really magnificent. Everyone had come to think that they were bronze, but that’s because the water had stained them over the years. We weren’t sure how they would clean up.

K-L: We assumed that it would be an intensive cleaning process, and that we would have to refinish the surface. But the contractors found a cleaning product that met our specifications. It was basically sprayed on, and wiped off. It was amazing.

K-L: There were originally 66 trees, although that number was down to 50 just prior to construction. We removed 23 because they were in failing health, or they were already dead, and we planted 33 new trees. The final count is 60.

C: If we replaced trees, we used really large, substantial trees. They had to be craned in; it was quite a spectacle. Now they look right at home.

K-L: We found them all in Minnesota. Most of them came from an Apple Valley nursery.

There’s one place where we made a change from the original plan. Along Nicollet Mall, there was a handful of ash trees. Because of a disease issue, we replaced them with a hybrid elm.

There are two kinds of shrubs: junipers and mugo pines.

The return to the original no-flowers, green-only color palette:

K-L: There’s a serenity to the combination of the green and the water. There was a lot more lawn in [Friedberg’s] original plan. For heavily trafficked areas, and for accessibility, we placed permeable pavers where historically there was lawn.

C: The city and Green Minneapolis are trying to figure out how they’re going to program it. The infrastructure is in place for ice skating, but that probably won’t happen this year.

Their feelings about navigating a high-profile preservation project:

C: We’ve always been a firm that has authored our own work, with lots of collaborators. But the idea of coming into another landscape architect’s space, and renovating it, and making it accessible, I had no idea that it would be as rewarding as it was. It was a big responsibility. We knew it was important to the city, and the people, and the preservationists. It was a rigorous, highly collaborative process. I don’t know how many public meetings we had.

K-L: Over 60 [meetings]. There was a tremendous amount of interest in the project.

The elements that didn’t make it into their final plans:

C: I really don’t have any regrets, or wishes. The truth is, even though it’s of an era that’s recognizable in the history of landscape architecture, I think you can stand here and say that it’s a pretty timeless plaza.

It passes the test of 2019, that’s for sure. I was speaking to a woman here just the other day, and she thought the whole thing was new — she had no idea that she was in a historic space.

It certainly feels very much alive.

An act of corporate generosity gave Peavey Plaza its name. To mark its centennial year in 1974, the Peavey Co., a grain milling and trading firm, donated $600,000 (about $3.4 million in today’s dollars) toward the creation of a public space outside then-new Orchestra Hall.

The project, designed by New York City landscape architect M. Paul Friedberg, was dedicated on June 10, 1975. The cost was $3.3 million (nearly $17 million in 2019 dollars), with additional funds coming from the city, plus a $1 million gift from the Minnesota Orchestral Association.

Two-acre Peavey was part of a neighborhood remake that included the Loring Greenway (also designed by Friedberg) and a 1981 extension of Nicollet Mall from 10th Street to Grant Street. (The Peavey Co. name disappeared from the corporate landscape when the business was purchased by Conagra in 1982.)

Fast-forward several decades. The long-neglected plaza was showing its age when city officials decided to demolish it and start over. In 2012, preservation activists sued to prevent that plan; a year later, a settlement repositioned the project as a restoration, and Peavey was placed on the National Register of Historic Places.

It took six years — that’s six arid, fountain-free summers, thanks to aging pumps and drains — before an enthrallingly reborn Peavey finally reopened last month. The $10 million yearlong construction process was funded by $2 million in state bonds (granted back in 2010), $4 million from the city and $4 million raised by the Minneapolis Downtown Council and the nonprofit Green Minneapolis. It’s money well spent.