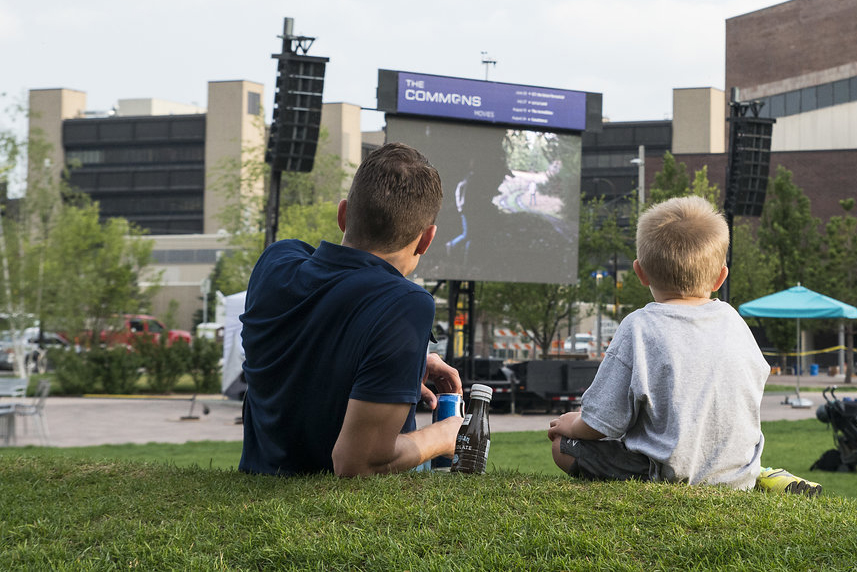 Mayor Betsy Hodges said, “The Commons is a warm and inviting place for everyone to enjoy in downtown Minneapolis. I’m very excited to see this transformative public space became even more dynamic this summer with a wide range of activities that will appeal to a large cross section of the community.”

The nonprofit conservancy Green Minneapolis partnered with several local organizations to create programming that is meant to attract daily visitors to the destination park, engage users with a variety of interests, and showcase the work of organizations and performers from across the Twin Cities.

Under a new ordinance passed by the City Council spearheaded by Council Member Jacob Frey, visitors to The Commons can bring and consume alcoholic beverages during designated events. The first event will be a film screening on June 29.

“Bring a picnic blanket, a pastrami sandwich, and a bottle of wine, and we’ll see ya there,” Frey said. While restricted to a limited number of events this year, Green Minneapolis is excited to facilitate this sort of social recreation at The Commons.

The Commons is also a site for events produced by others, including the X Games, which comes to U.S. Bank Stadium and The Commons in mid-July, and Vikings home game activations.

These programs are intended to draw not only neighbors but also people from the greater community and region. “It is important that The Commons be engaging for everyone. Parks and green spaces are one of the few places where people from diverse backgrounds still come together as a community to recreate and have fun. We are committed to making The Commons our city’s ‘common ground’,” said David Wilson, board chair of Green Minneapolis.

“There has been a lot of interest in activating The Commons,” said Beth Shogren, executive director of Green Minneapolis. “We are grateful for the sponsors and in kind partnerships that have made this level of programming possible. Programming and activation are essential to the operations of The Commons, to create the active and engaging destination park envisioned by City leaders. Sponsorships and donations are needed to develop a sustainable operating model for the future.”

Event updates will be available throughout the season on The Commons website www.commonsmpls.com, or via The Commons social media channels, @commonsmpls.

The 2017 Summer Season is just the start. In the future, Green Minneapolis will work toward more robust programming, further tailor events to community desires, and produce more events unique to Minneapolis.

Daily Amenities – Free and open to the public

• Reading cart – Explore best sellers and titles from local publishers as well as daily newspapers, available for use in the park. Make The Commons your stop over lunch to read up on news.
o Produced by The Commons
o Sponsor: With support from Bond & Devick Wealth Partners
o Daily: Opens June 1
o 8am – 8pm
o Location: 4th Street side of West Block

• Ping Pong – Challenge your friends, family and colleagues to a game. Free paddles and balls available for use in the park.
o Produced by The Commons
o Daily: Opens June 1
o 10am – 8pm
o Location: East Block

• Public Art Installation – Orbacles by MINN_LAB is presented as part of the City of Minneapolis Creative City Challenge. The winning submission by MINN_LAB addresses how climate change affects birdlife in Minnesota, and launches in conjunction with the Northern Spark Festival June 10.
o Partner Event: The Arts, Culture and the Creative Economy Program of the City of Minneapolis and Northern Lights.mn
o Daily: June 10 – July 31
o 6am – 10pm
o Location: West Block

Series – Free and open to the public

• Film Festival – A series of 4 festive movie nights, with a large format LED screen to enable easy viewing before sundown. Scheduled films to be announced, but will include popular titles as well as features by local filmmakers. This Commons-Produced event is the first ever designated as a BYO event, enabling patrons to bring and consume their own wine or beer in the park. Settle in for an evening of film with friends and a picnic.
o Produced by The Commons
o Thursdays: June 29, July 27, August 10 & August 24, 7pm+
o Designated BYO Event

• Bike with a Ranger – Hop on your own bike, or grab a Nice Ride to take a tour with a National Park Service Ranger. Tour the neighborhoods and learn more about flora and fauna, the Mississippi River or a variety of topics.
o Partner Event: Mississippi Park Connection & the National Park Service
o Saturdays: August 5, September 16 & October 21, 10-11:30am
o Location: Meet at NiceRide – 4th Street and Portland Avenue

Single Events – Free and open to the public

• Northern Spark – Free all night art festival. Start your evening at The Commons, and then continue on to view more than 70 art installations at sites along the Green Line.
o Produced by Northern Lights.mn in partnership with The Commons
o See https://2017.northernspark.org/ for more information
o Saturday, June 10, 8:59pm – 5:26am
o Location: Both blocks
o Portland Avenue closed

• Storytime with John Coy & Wing Young Huie: Their Great Gift: Courage, Sacrifice, and Hope in a New Land. – Where does your family come from? We’ll talk about the process behind the creation of Coy & Young Huie’s award-winning book, our own arrival stories, and create our own family trees.
o Produced by The Commons
o Sunday, June 18, 11am-12pm
o Location: West Block at reading cart

• Badass Dash – Badass Dash is an obstacle course challenge and endurance race offered to competitors of all levels in multiple divisions. Programming in The Commons and within US Bank Stadium.
o See https://www.usbankstadium.com/events/detail/badass-dash for more information.
o June 3
o Time: 8:00am
o Open to the public; Ticketed
o Location: East Block

About The Commons
The Commons is a new 4.2 acre public green space in downtown Minneapolis. The Commons was designed as a place for respite, everyday activities, and events for residents, workers, and visitors. www.commonsmpls.com @commonsmpls