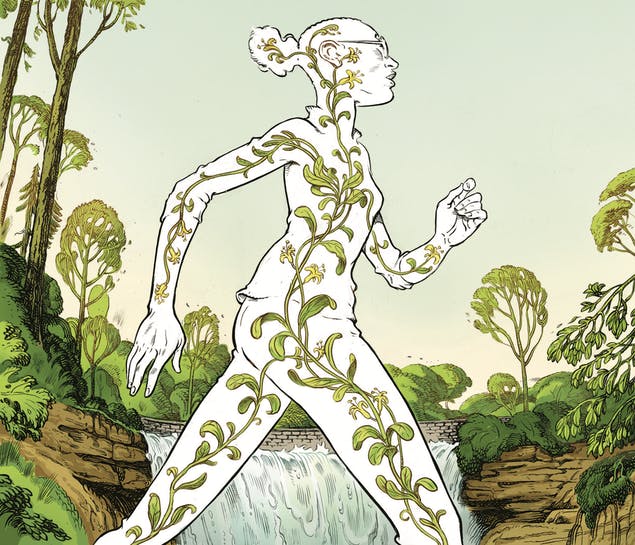 ‘Go for a walk and call me in the morning’: How prescriptions for outdoors time are taking root

Some Minnesota doctors will soon be handing out prescriptions for time outdoors amid legitimate science that points to nature’s health benefits.

Your blood pressure is a little high. You could stand to lose some weight, and, yeah, you’re stressed. You leave the doctor’s office with directions to a park near your house and a prescription for 30 minutes a day out there breathing fresh air among the trees and the birds.

Until recently, doctors encouraged patients to get more outdoor exercise but stopped short of writing a prescription. Soon, in collaboration with parks and trails organizations, community and athletic associations, some Minnesota doctors will be handing patients prescriptions for that dose of nature.

“The data is there. We’re wired to be connected to nature,” said Dr. Brent Bauer of the Mayo Clinic in Rochester. “Cool things happen when you’re exposed to nature for two hours a week — inflammation is reduced, stress, anxiety, heart rate.”

A formal mechanism, Bauer said, makes it easier for patients to follow through, and sends the message that being outdoors is a legitimate therapy. “A prescription says, ‘My doctor recommended this; it’s not a waste of time.’ I think the concept [prescribing outdoor activity] might engage a group of patients not currently engaged with the generic nature-is-good-for-us bromide.”

Bauer founded Mayo’s complementary and integrative medicine program 20 years ago grounded in the theory of biophilia — that humans have an innate need to connect with nature. That people spend 90% of their time indoors, most of it sitting, has resulted in negative consequences: obesity, diabetes, anxiety, depression, to name a few. The last 10 years have seen a “scientification,” as Bauer called it, of our need for nature. It’s been studied, measured.

At the same time, there’s been a shift toward preventive medicine — lifestyle choices like food, exercise, spirituality — and efforts to make health care more efficient. There has been collaboration between communities that haven’t overlapped — parks and the Department of Natural Resources with public health; health insurance with health clubs; sports events with hospitals. In 2010, a collaboration of doctors and grocers called Wholesome Wave allowed doctors to prescribe patients fruits and vegetables.

Park Rx America’s prescription program integrates a listing of parks with electronic health records. Providers can find parks for their patients. The nonprofit collaborates with park systems, and claims to have 8,500 parks on its platform in 43 states.

Bauer signed on with one of those collaborations, Park Rx America, a national nonprofit established by Washington, D.C., pediatrician Dr. Robert Zarr in 2017. Park Rx America, in partnership with state parks agencies, allows health care providers to find a park near a patient’s home, prescribe a certain amount of time in that park, and send a text reminder to fill the prescription. Park Rx merges with electronic medical records so the prescription can be recorded. According to Zarr, there are 22 registered Park Rx health care providers in Minnesota and 96 parks listed.

“Will a walk in the woods cure hypertension? That’s a stretch,” Bauer said. “By itself, it’s not a magic wellness program. But it gives me another tool in adjunct with, not replacing, conventional treatment. At a typical wellness consult, we talk about exercise, nutrition, social connections, spirituality, sleep — lifestyle choices. People can transform their health, and maybe go from taking three pills to one. These kinds of lifestyle options are usually cheap, the patient is in charge — there’s almost no downside.”

Though still new, Bauer said park prescriptions have been well-received by the patients involved, so far, all outside Minnesota. There is, however, some hesitancy among doctors to prescribe nature. Even though there is scientific evidence, most doctors aren’t familiar with it yet. And, talking with patients about lifestyle options is time-consuming. Even the minute it takes to log into the Park Rx website maybe too much to wedge into a 10-minute visit, Bauer said.

In the past, sports organizations provided opportunities to do sports, the medical community provided health care, and public land organizations managed parks and trails and green spaces. And those communities stayed in their own lanes.

“We haven’t collaborated as purposefully until recent years,” said Arielle Courtney, partnership development consultant with the Minnesota Department of Natural Resources. “Research has been coming out about the health benefits of being out in nature. There’s a realization that we all — the medical community, organizations like the YMCA — have shared goals, so there’s motivation to work together.”

The DNR is working with HealthPartners, the Mayo Clinic and University of Minnesota Health to tap into the Park Rx platform. While the DNR has always had a quality-of-life component, keeping people healthy has not traditionally been part of its mission. Courtney listed three ways the DNR benefits from nature prescriptions.

“We are challenged to maintain relevance,” she said. “We’re competing with screens, TV, video games for people’s free time. Getting a recommendation from their doctor is a new way to reach them. We hope they get outside and see how great that makes them feel and are hooked. Second, we hope that feeling grows their connection with nature, so they’ll become environmental stewards. And third, there are huge disparities in health care in urban populations — those are the same people we’re trying to encourage to use parks and trails.”

The novelty of prescribing time in the outdoors and the logistics of coordinating giant organizations like HealthPartners and the DNR in uncharted waters means that receiving a nature prescription from your doctor here in Minnesota is still maybe a year away. Unless you’re a child. In which case, this is old news.

Some Twin Cities children have been leaving the pediatrician’s office with a Sweat Rx since 2014. Sweat Rx was the first formal outdoor prescription program in the country, its creators say. But prescriptions for outdoor activity came second; they started with the outdoor activities. Betsy Grams and Tony Schiller co-founded CycleHealth as a way to improve kids’ health through training programs, activity challenges and fun adventure races. The events were outdoors, a little bit nontraditional (the triathlon is swim-bike-run with obstacles thrown in), and noncompetitive.

“We were looking for ways to reach kids who weren’t in organized sports, to introduce them to fitness, to let them experience victories, and see how fun and good it feels to set goals and achieve them,” Grams said. “We created events where it wasn’t just the fastest kids who were celebrated.”

Focusing on health rather than competition was a natural tie-in to the medical community. Through a connection with one of the doctors, Grams and Schiller met with at Central + Priority Pediatrics in Woodbury in 2014 to talk about their upcoming kids’ triathlon. Their hope for that meeting was to be allowed to put event posters in the clinic, and that the doctors might share the kid-centric training programs with their patients.

“We were really surprised when they said they would actually prescribe the triathlon to their patients that summer. We didn’t know how hungry doctors were for a concrete tool for encouraging kids to get outdoors, to live the lifestyle they’d been talking about,” Grams said.

The two quickly printed a prescription-ish pad of paper with a space for the patient’s name and a link to training materials and race registration. That was the start of Sweat Rx. CycleHealth now works with 52 pediatric clinics in the Twin Cities area.

Dr. Julie Ewasiuk of South Lake Pediatrics in Chaska, has been writing prescriptions for Sweat Rx for a few years now. Yes, doing so legitimized the health benefits of being outdoors, but even more vital to families was the comprehensiveness of CycleHealth’s program — online training challenges show them how to prepare for the culminating adventure race.

“The vast majority of families want their kids to be outside and active, but they may not know how to do that, particularly if their child isn’t in organized sports,” Ewasiuk said. “The feedback has been really positive from families who signed up for CycleHealth events. My hope is that by giving Sweat Rx, we’re laying a foundation of interest in outdoor activities. Maybe they discover they really love biking and will continue to do that. We all know how important it is for kids to be outside. It’s nice to have a tool to help make that happen.”

While Grams and Schiller hustled to assemble all the moving parts and partnerships necessary for a nature prescription enterprise, Grams admitted a lot of CycleHealth’s precedent-free success was fortuitous timing. They reached out to the Three Rivers Park District at just the right time. Three Rivers was happy to provide the natural resources for CycleHealth’s kids’ triathlon, the winter “Kidarod,” and the fall “Resilinator” adventure race, because CycleHealth brought the human resources and event management skills. The events draw families who might not ordinarily come to their parks, and the races showed those families at least one activity they could do there — families know, for example, that they can snowshoe at Fish Lake Regional Park.

Another bit of serendipitous timing? The chief executive of the YMCA of the Greater Twin Cities happened to notice Sweat Rx in a pediatrician’s office, at a time when that community health and recreation mainstay was contemplating ways it could affect growing indoor malaise that is connected with anxiety, depression and obesity.

“He reached out and within an hour extended an invitation to join the YMCA,” Grams said. CycleHealth was acquired by the YMCA in 2017, part of the Y’s Get Outdoors campaign that encourages people to take the nature cure.

Cheap, readily accessible, and side-effect free, Minnesota’s 10,000 lakes and vaunted parks and trails are shaping up to be, quite literally, what the doctor ordered.

Sarah Barker is a freelance writer. She lives in St. Paul.